"In every thing give thanks: for this is the will of God in Christ Jesus concerning you. Quench not the Spirit. Despise not prophesyings. Prove all things; hold fast that which is good."

Corroborating Evidence for the
Book of Mormon

A core belief of The Church of Jesus Christ of Latter-day Saints is that The Book of Mormon is a translation of an ancient record that was written on golden plates. We believe that it is scripture that testifies of God's dealings with prophets and followers of Jesus Christ in the ancient Americas. It tells of an Israelite family who, led by God, fled Jerusalem circa 600 B.C., bringing with them scriptural records written on brass plates. They, along with others that joined them, traveled south through the Arabian peninsula to the coast of the Arabian Sea. Under God's direction they built a ship and sailed across the ocean landing somewhere in the Americas-their Promised Land. The family eventually split into two factions, one that believed in God and Christ and another that didn't. They mixed with local inhabitants and grew into two nations. The Book of Mormon is religious histories that chronicle the rise and fall of these nations and others, up to their destruction circa 400 A.D. The Book of Mormon also tells of Jesus Christ's visit to these people following His resurrection and The Ascension. Before the fall of the people through years of warfare, a prophet named Mormon abridged all the records that had been kept through the years into a single volume on golden plates. He entrusted it with his son, Moroni, who took the record and buried it in a hillside to be brought forth again in our day for God's purposes.

It's a reasonable expectation that there should be some sort of evidence regarding the Book of Mormon. And there is, if someone is willing to look for it. While no archaeologist, researcher or random hiker has come across a sign in the Americas that reads "Welcome to Zarahemla" or a grave that reads "Nephi, Beloved Son and Father" (Not that anyone would be able to read the language on the sign or grave anyway), there is other evidence that has been found that corroborates claims and locations mentioned within the book's text, including the Risen Christ's visit. The most obvious reference to Christ in America is, of course, Montezuma mistaking Cortes for 'the great white bearded god that promised to return'. That's a strong parallel to the account in 3rd Nephi.

The evidence and information is interesting but generally won't change anyone's mind either way. If someone believes in the Book of Mormon, this is an added bonus. If someone doesn't, then they'll find a way to quickly explain the evidence away. Archaeological proof is nice but it's no substitute for receiving a testimony of the Book of Mormon based on the Holy Ghost. As Jesus said to Peter, "Blessed art thou, Simon Bar-jona: for flesh and blood hath not revealed it unto thee, but my Father which is in heaven." Always trust in God. Physical proof can be reassuring, but the only way to get solid testimony of the Book of Mormon is from the Holy Ghost.

Read this essay on evidence about The Book of Mormon.
It's a good primer and covers additional evidences.

Read the accounts of People That Saw the Gold Plates of the Book of Mormon.
Contrary to pop culture belief, over a dozen people were shown the actual golden plates and handled them. Other people had varying levels of experience with the plates.

View a page from the original Book of Mormon manuscript.
To translate the golden plates Joseph Smith would look into the Urim and Thummim, or the seer stone, and he would read aloud the word that he saw. If Joseph couldn't read a word he'd spell it out loud. His scribe (Joseph couldn't write well) would write the word and read it back. After it was written the next word would appear. Joseph never dictated any manner of punctuation throughout the whole translation process. Not even a comma or period. After the manuscript went to the printers the editor had to add in all the punctuation himself. This is significant for a few reasons: 1. It refutes the notion that Joseph was simply reading from another book or manuscript, or that he was reciting memorized sentences; and 2. There is no punctuation in Hebrew writing. Though the golden plates weren't written in the Hebrew language, they were written by people of Hebrew origin. The lack of punctuation is linguistic evidence of the book's authenticity.

This list compiled by John Clark as part of his presentation Debating the Foundations of Mormonism: The Book of Mormon and Archaeology, illustrates items mentioned in the Book of Mormon that were anachronisms when the book was published in 1830 but have since been discovered to be factual. The number has risen to over 50%. That's very significant.

The high point of the Book of Mormon is the account of Jesus' visit after The Resurrection. I already mentioned Montezuma and Cortes as one instance that alludes to this. There is other evidence in Native American histories that point to this event as well. The book, "He Walked The Americas", is a collection of Native American traditions by an anthropologist that spent 25 years collecting histories from various tribes that teach of the son of god, born of a virgin, who walks the Earth as a man. He came from the East and He cured the sick, gave sight to the blind and healed the crippled, choose twelve people to lead and promised to return. He was known by the names The Great Peacemaker, The Pale Prophet, The Healer, The Pale God, The Dawn God, Deganawida, and Chee-Zoos.

DNA Discovery Shows Native Americans Have West Eurasian Origins
The Book of Mormon claims people from Jerusalem came and helped to populate the Americas. Critics have belabored the point that there is no Middle Eastern DNA evidence in Native Americans to support this. Read about a "shocking" discovery in 2013.

Unique Metal Book Goes On Display
Read about and see a picture of an ancient Etruscan record written on metal golden plates.

Also, read about the copper scroll.
One of the famous Dead Sea Scrolls was inscribed on a copper sheet. Further evidence that writing on metal, and caching away records, was done anciently.

Speaking of the Dead Sea Scrolls. There are some teachings unique to the LDS Church that are found in The Book of Mormon and other LDS scripture but are not found in the Bible, but some are written in the scrolls. This is indicative that Joseph Smith was indeed a prophet.
Read about these LDS beliefs in the Dead Sea Scrolls. 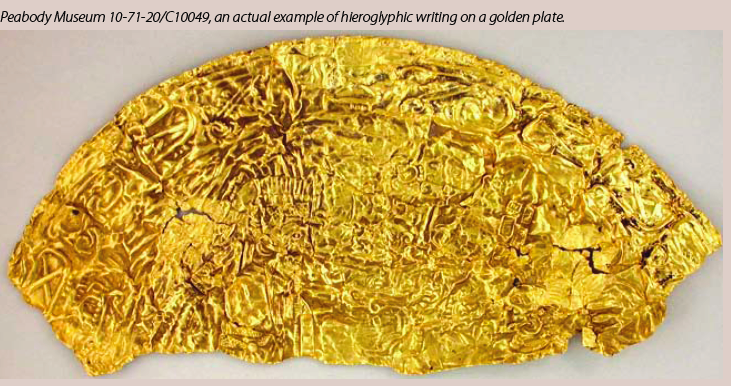 The image above is a fragment of one of several golden disks discovered by Edward Herbert Thompson at Chichén Itzá near the turn of the 20th century. The collection is currently held by the Peabody Museum at Harvard University. They date to the ninth century A.D. There are at least 29 round plates or disks, either intact or in fragments. Some are gold, others are gold-plated copper or just metal. The golden plates delivered to Joseph Smith were said to be an alloy of gold, copper and other metals. Thus making them easier to write on and not too heavy to carry.

Critics have said the Book of Mormon could not possibly be true because there was no evidence of ancient transoceanic travel between the old world and new world.

Read about Dr. Svetla Balabanova discovery of cocaine in Egyptian mummies.
Since coca is only found in The Americas this is a strong indicator that there was transoceanic travel anciently.

Read and see a picture of the Calixtlahuaca Head, an ancient roman terracotta head found in Mexico.

The Book of Mormon claims that a family of Jews came to the America's from Jerusalem. Read about The Los Lunas Decalogue Stone, a stone found in New Mexico that has an inscription of The Ten Commandments. The carving was dated to Pre-Columbus times.

Joseph Smith claims to have translated an ancient record. Some critics claim Joseph simply plagiarized the King James Bible. Read "What Command Syntax Tells Us About Book of Mormon Authorship", this research compares syntax of the two texts.

Here's additional linguistic evidence from the Book of Mormon.

The Iztapa Stela 5 Stone
An account in the book of 1 Nephi, the father of the family, named Lehi, tells of a dream about the Tree of Life. This stone carving held by the Smithsonian Institute bears a strong resemblance to this dream, and is colloquially called "The Lehi Stone".

In 2013, a lost city in Honduras was discovered. This lost city didn't have a "Welcome to Zarahemla" sign. But it is a reminder that there are still plenty of discoveries to be made. Which means there is still the possibility that locations explicitly mentioned in the Book of Mormon will one day be discovered.

Read What Archaeologists Found at Nephi's Bountiful.
Since we don't know where Lehi's family landed in the America's, we don't know what location to start looking in. However, we do know the area in the Old World where he left from and traveled through. The article discusses locations in the Middle East described in the Book of Mormon that were unknown to Americans during Joseph Smith's time.

One of the Middle East locations mentioned in the Book of Mormon is Nahom. Read about the discovery of The Old World location for the Land of Nahom. The Book of Mormon talks about the use of metals in ancient America. However, archaeologists discovered that in the ancient American locations of Pumapunku, Bolivia; and Koricancha, Ollantaytambo, and Yuroc Rumi, Peru, large stone structure were constructed using metal clamps that were forged using portable smelters. The above image shows the location of the clips carved in the stone. Analysis showed these metal clips were made of 2.05% arsenic, 95.15% copper, 0.26% iron, 0.84% silicon and 1.70% nickel. It was previously believed smelting and metal work of this type did not exist in ancient America. Another example of The Book of Mormon being correct and critics being wrong.